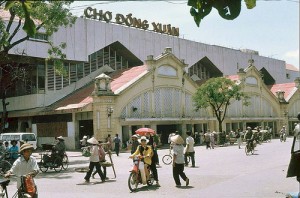 Dong Xuan market was constructed in 1889 near Huyen Thien pagoda and the Red river banking. This is an ideal place to build a big market.

Dong Xuan market was constructed by a French contractor company named Poinsard Veyret that provided steel frames and tole roof. The market was designed in a simple model: steel frames, tole roof with the area of 6,500 square meters. The market includes 5 blocks with arch-shape in front, inside market is separated by lanes betwceen the arches (each arch 52 meter long, steel frame 19 meter high, 25 meter wide). In Northeast area located Bac Qua market and Dong Xuan market in the western area. In fact, the whole market is just a big supermarket, but due to northeast market is where main food items, fruits and vegetables, northern agricultural products brought across the Red River were mainly sold, so called Bac Qua market. The area of Bac Qua market initially was just a vacant land, then people made temporary houses against rain or shine. 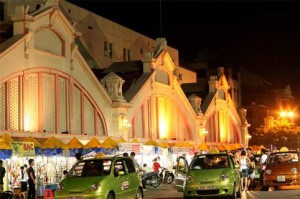 Due to the sufficient convergence of favorable factors of traffic and population, Dong Xuan became a place “On the wharf boat.” Especially since the French built Long Bien Bridge, the Dong Xuan Market became a busiest venue not only in Hanoi but also in Northern area. It quickly attracted the attention of world trade enterprises, especially those of France, Spain, India, etc.

At first, Dong Xuan market only opened every two days as Market Day style, but later, due to the demands of trade and economic development, the market was opened from morning to afternoon. Goods are sold in the market is very rich and diverse: from agricultural products, foods, fruits and vegetables, in every fabric and machinery of French, Chinese, Indian, (Kaki France, Bombay Silk

Through historical ups and downs as well as struggles for national defense, despite bombing destruction, Dong Xuan Market is always a great wholesale market of the northern region. Today it has become a shopping destination of tourists at home and abroad.