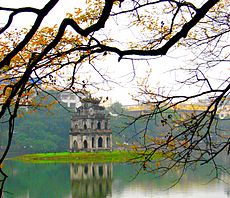 Hoan Kiem Lake means the lake of returned sword, also known as “Sword Lake”. It is a lake in the historical center of Hanoi, the capital city of Vietnam. The lake is one of the major scenic spots in the city and serves as a focal point for its public life.

Turtle Tower: The tower was erected on the Turtle islet, the former fishing site under king Le Thanh Tong.

The Huc Brigde: leading to Ngoc Son Temple Gate and was  proposed to build in 1865by  Nguyen Van Sieu a Confucian master and famous writer. Its name means where the sun light beans comes together in every morning ( Morning Sunlight Bridge). 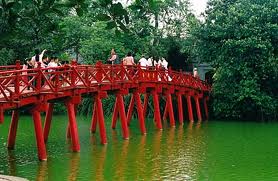 Pen Tower: on the east bank of the lake, was built in 1865, consists of seven floors. On the top is a symbol of a pen for up to heaven, the body engraved with three letters Ta Thanh Thien (written on the sky). 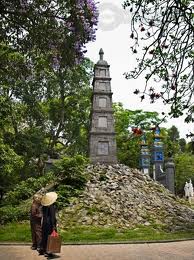