Being the capital of Vietnam, Hanoi is famous not only for its political importance but also its beauty and long history during the ages of the country. Among the most familiar sports in the city, Long Bien bridge is not just well known for its unique construction but its role in the history. Here in Vietnam the bridge is called the historical witness to the resilience of Hanoi in the two resistance wars as well as the major changes of this city in the new era. 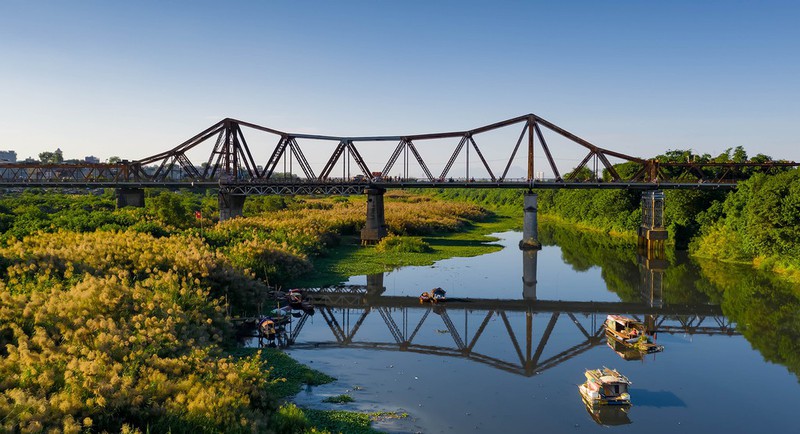 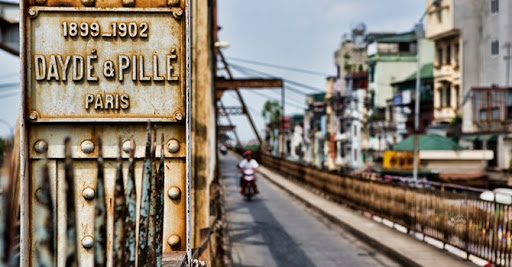 The plate mentioning the year of starting and completing the construction

Being the crucial connection between Hanoi and Hai Phong, the 2 biggest cities in Vietnam during the war against the US, Long Bien bridge was heavily bombarded by the US aircraft. After more than 10 times being bombed, most of its spans were destroyed and the remaining ones nowadays do tell a good story about those years of war.

In the peacetime, due to the drastic increase of vehicles since the 90s, Long Bien Bridge has been used only for trains, motorcycles, bicycles and pedestrians. Together with the construction of newer and more modern bridges linking the 2 sides of Red river, not many vehicles pass the bridge, thus it gradually becomes a spot for sight-seeing. 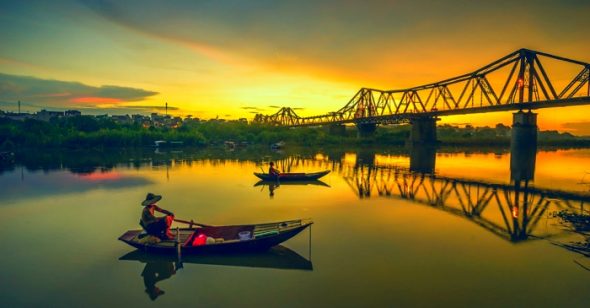 The bridge at dawn

There is a famous saying that says “Those who travel to Hanoi without visiting Long Bien bridge did not truly be in Hanoi”. Yes, there is no doubt about that, the bridge has witnessed Hanoi  through most of its major movements as a loyal accompany. Standing on the bridge your eyes will be astonished with the stunning beauty of the city. Under the bridge, the Red River curves around the lush alluvial grounds; on the river, boats sail up and down busily. Along the riverbanks are verdant banana fields and corn alluvial plains stretching out towards every direction as an enormous green carpet. Visiting Long Bien Bridge, you for sure would be amazed at the spectacular beauty of Hanoi, which could be only imagined in a fairy tale. 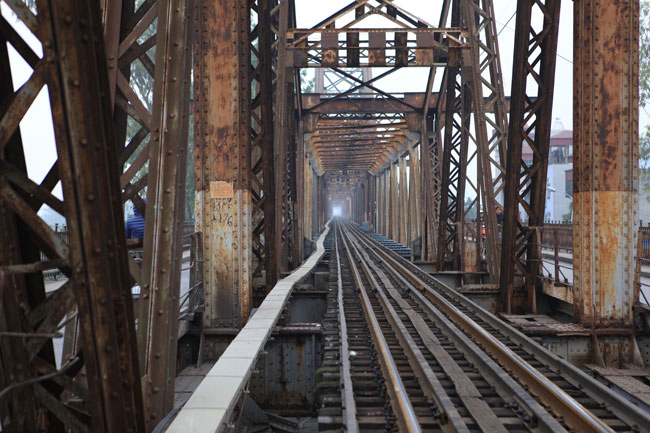 The railway built inside the bridge

Thanks to its breath-taking view, the bridge has become an ideal place for short hanging outs

The breathtaking view of Long Bien Bridge makes it an ideal destination for those who want to find the peace in a hustle and bustle city like Hanoi. Many foreign visitors and youngsters have gone to Long Bien Bridge to take photos in order to memorize their youth in the luxurious capital city.