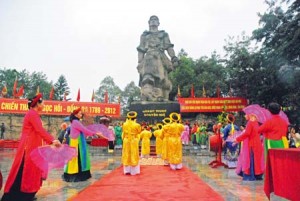 In the main festival, there are many healthy games presenting martial art traditional will, especially the game of Thang Long Fire Dragon procession.

200 years ago (1789), this is bloody battlefield, on the night of 4th of January (29 February, 1789 solar calendar) Enemy’s shell in Khuong Thuong was completely destroyed. Dong Da Mound became a glorious victory of Vietnamese people and also a historical evidence of disgraceful failure of the North enemy. On the morning of festival, officials and the elderly gather for festival preparation. Around 12 noon, from Khuong Thuong Village House to Dong Da mound, residents here hold procession ceremony in a long line. 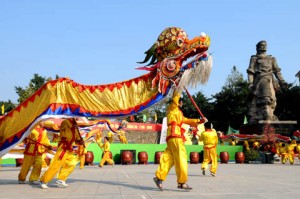 However, the most attractive  is  groups with Fire Dragons and cudgel performance aiming to recall the battle scenes in the past, praised the spirit of the Tay Son insurgent army. This is a unique game performed in Dong Da festival.

During the festival, there are other traditional games such as Dragon dance, Chinese chess, human chess, cock fighting. Nowadays, taking part in Dong Da festival is an indispensable need to Hanoian on occasion of Tet Holiday.