Vong La festival is annually organized from 13 January to 15th January (lunar calendar) in Dai Do communal house, Vong La commune, Dong Anh district. The festival honor Ngu Vi Ton Than. According to legend, in the reign of 18th Hung King, Quoc Te and his wife Phung Thi Loan (La Nuong) took responsible to look after treasury and food store in Vong La commune. They both are old but have not any child. One night, La Nuong dreams and sees 3 white snakes crawling through her body. After that, she bears 3 children after 9 months and 10 days. Three of them are more talent, intelligent and healthy than normal men. Thereby, they were honored as Generals who defeat Thuc Phan army. On the way back, they suddenly passed away without any disease. The king was deeply mourned, therefore, he ordered villagers build a temple to honor them  as Tutelary God of Vong La village. 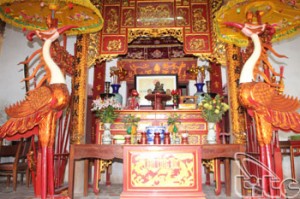 On 13 January: In the morning, the priest wear traditional costumes and prepare worshiping and  Village House opening ceremony. In the afternoon, a team of priest starts the incense ceremony.

Palanquin procession goes from the Village House to La Vong commune around and then go back the village house.

On 15th January: on the morning, a team of female priest wears traditional costumes for Saint incense ceremony. On the afternoon, a team of male priest organize ending ceremony and deliver Saint’s blessing.