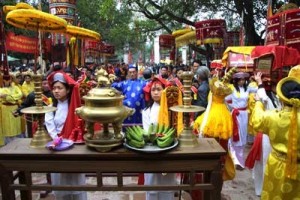 The festival of Ba Xa temple is held on 12th June (lunar calendar) at Minh Duc commune, Ung Hoa district. The festival has long been held by villages such as: Thinh Cau, Thinh Bang, Thinh Than, Thinh Thuong, Thinh Ha and residents from other places.

According to the elderly in these villages, in the past, this area is a waterlogged field, only one farming season but still unstable life. People here was very poor until it appeared a man with family name Mac and first name  Trau Trang (White Buffalo) gave a hand to poor farmers by growing rice adapted to each season. As a result, people became prosperous and rich. When he passed away, to commemorate his merit, residents here raised their money for building a temple to honor and respect him as a Tutelary God. 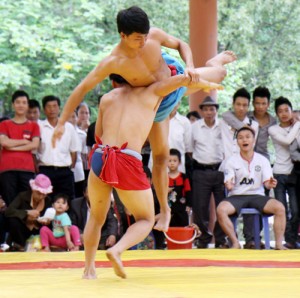 The temple of Saint Mac Trau located in the center of 5 villages: Thinh Cau, Thinh Bang, Thinh Than, Thinh Thuong, Thinh Ha. The front of temple looks eastward and a large lotus pond. One side is near a branch of Nhue River, another is near a snake-shaped road.

On the main festival, residents here open a calf fighting and the strongest one in five will be killed for Saint offering and its meat is considered as Saint’s blessing and delivered equally for 5 villages. On the early morning, representatives of each village invite their God to take part in the festival and then the water procession follows. During the festival, there are other traditional games such as Dragon dance, Lion dance, cock fighting and wrestling.

The festival of Ba Xa temple has long become an important part of five villages: Thinh Cau, Thinh Bang, Thinh Than, Thinh Thuong, Thinh Ha and attracts crowds of pilgrims from other places. To cater for the accommodation of pilgrims, many local buildings have been built near the temple, set up shops that make this area busier. Therefore close to the temple has a street named Cong Than street.