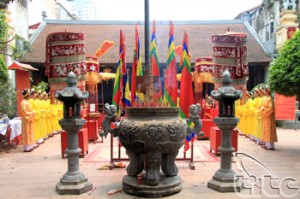 The communal house Ung Thien is an ancient communal house near the north bank of To Lich river, Lang Ha ward, Ba Dinh district, Ha Noi city. The communal house was built in period 1069-1072 under King Ly Thanh Tong and has worshipped a Goddess who had merit of assisting the King defeated Chiêm invaders. Under King Tran Anh Tong, she was honored as Trung-Nguyen, then Ung Thien Hoa Duc. Through later dynasties such as Le, Tay Son and Nguyen,  she was also honored as Thượng Đẳng Tối Linh Thần ( Joss of upper holy spirit). The festival is annually held within three days from 6th to 8th of March (lunar calendar) in order to acknowledge the Goddess’s merit. Participants include residents in Lang Ha ward and other wards. 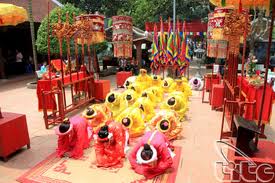 On early morning of 6th of March, a selected group take responsible of cleaning the statue. At 8 am, the ceremony is started by prestigious village elders in traditional uniform. Continuing the ceremony is families in Lang Ha ward and representatives from other wards coming for incense offering ceremony.

On the afternoon same day (6th of March) and whole day 7th of March, the incense offering is carried out by female elders from delegations coming to the festival.

On the morning of 8th of February, a group of male priest of Lang Thuong ward come to worship the Saint, then couples of male elders come to conduct the thanks Saint ceremony. On the afternoon, the festival is continued with music performances and funny games and ends on sunset.

Together with the festival of Saint ceremony, residents in the region and pilgrims organize folk games and folk music such as: Quan ho singing, chèo (a form of generally satirical musical theatre), Chinese chess, cock fighting, etc.

According to legend, the Ung Thien communal house also worships Dia Mau Buddha who born all creatures on earth, hence, in the past, it was a major Buddhist center of the city. During March, pilgrims from parts of country come here to worship Buddha, Gods. So on March, the communal house attracts the most crowded  visitors in year.