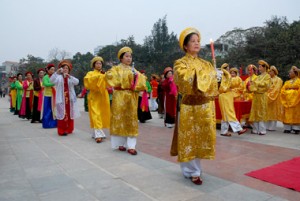 Every year, on 12th of January, three villages: Dao Nguyen, Ngu Cau and An Ha in An Thuong commune, Hoai Duc district, Hanoi holds traditional festivals to acknowledge the great merit of town Gods. The festival is imbued with cultural identity of countryside from Northern delta.

According to ancient document, the An Ha village in the past worshiped Do Thien family. He is a former officer under Thuc Phan An Duong dynasty. In 214 BC, when Tan enemy invaded our country, Mr. Do Thien, his two wives and 9 children take part in fighting against the invaders. After winning Ling Nam area, the King opened the festival to congratulate and knight for his family. After that, his family is honored as Town God of Dun communal House by villagers. 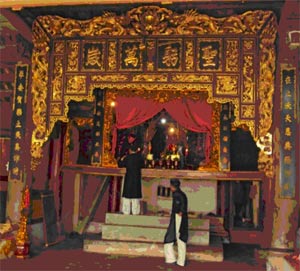 According to village record, the Town God of An Ha village is Miss Do Thi Bao, daughter of General Do Thien. After victory of invaders, she was knighted “Huyen Vu Princess” now still has her ancestral tablet at communal house.

We can say this is one of the special festivals of Northern delta region. It’s bearing cultural values of Vietnamese villages that need to be preserved and promoted.