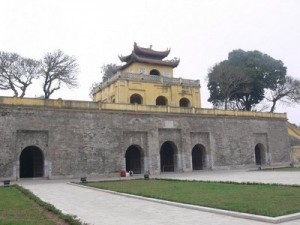 In the past, Hanoi Citadel located in a quite large area, the West side near Hoang Dieu street, East side near Nguyen Tri Phuong, South side near Tran Phu street, North side near Phan Dinh Phung street.

In 1010, under Ly dynasty, Thang Long became the capital city which was built and expanded after next dynasties. The Imperial Citadel of Thang Long was constructed with three round nesting. The Forbidden citadel under Ly – Tran dynasty in last round where is the palace area. Citadel in the middle covers economic zone for population in the east. In external round is  Dai La citadel. In 1805, Nguyen Dynasty constructed Hanoi Citadel and retained the Forbidden Citadel area.

The royal palaces and other various structures were largely destroyed by the colonial French in the late 19th century. Some structures remain such as Doan Mon gate and the Flag Tower of Hanoi, as well as the steps of Kinh Thien Palace and the Hau Lau (Princess’ Palace). 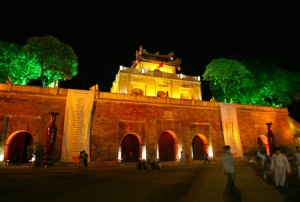 Doan Mon gate was the only building still remaining in overall , including a two -story gazebo ,the top of gazebo has eight floor roof , the below includes an entrance to open 5 big gates. The South side of main entrance was carved with the words ” Doan Mon “. Currently Doan Mon gate is relatively remained .

Kinh Thien Palace was destroyed in 1886 and turned into a building of committee of artillery commanding (French Army). There only remains of stone steps with two aisles and stone dragons in the middle, two carved stone aisles on the south side, the north is also steps decorated stone dragon.

Hau Lau palace or the Princess’s Palace was constructed in brick with box shape in lower floor.

These historic monuments used to be covered underground that demonstrated a political center and the capital of the country for nearly thousand years of Vietnam history.