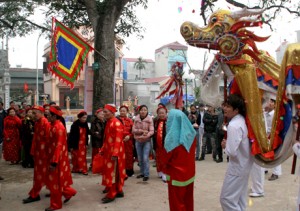 Time: from 9th to 12th of January lunar calendar, held every three years.

According to legend, Phung Hung defeated foreign invaders, became a King under name King Bo Cai. After his death, villagers built a temple to worship and honor him as their Town God.

On 9th of January, the communal house’s door is opened to be cleaned and hold “Nhap tich” ceremony.

On morning of 10th of January, villagers gather in main hall to conduct the ceremony of sacrifice.

According to legend, the festival is ceremony of enthronement of Phung Hung. A solemn procession with all necessary rituals is prepared for welcoming hat and clothes of the emperor Phung Hung from Sắc communal house to Đại house. Village elders, young men and girls wear beautiful festival costumes: silk trousers, áo the (a similar men’s tunic), áo gấm (a traditional Vietnamese brocade tunic for men), and brilliant boots. Palanquin procession is carried by young unmarried men. They just perform rituals of covering yellow parasols, purple parasols , etc.  just dance ancient styles: drumming dance,  sênh tiền dance (sênh tiền is a Vietnamese musical instrument, a combination of clapper, rasp, and jingle made from three pieces of wood with old Chinese coins attached by strings) in melodious music. Particularly, in this procession, the procession men on two sides walk and turn two face to face at the same time. When the procession arrived,  elders respectfully read oration, hold incense offering ceremony, open iron case to take a pen out and begin the  ceremony.

Beside the ritual part, the feast part is busier with happy dances such as: dragon dance, lion dance, sênh tiền dance and flag dance. But most interesting dance in the festival is dance “whore drum” that performed by young men who play role as women because according to old customs, women were not allowed to take part in holy place. In addition, although they look like women, their performance shows male style and chivalry. 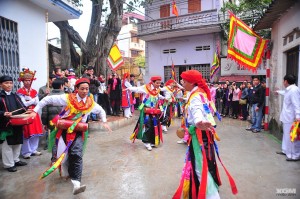 12th of January is the ending ceremony. Villager end the festival with the flag dance. The dance symbolizes for historic story of Phung Hung in a occasion of selecting talents for his army before the fighting against foreign invader under Duong dynasty. Ending the ceremony, villagers gather in the communal house to enjoy God’s blessing and hope for a better new year.