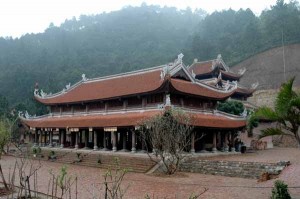 Located in Soc temple complex, Non Nuoc pagoda and Vietnam Buddhist academy is a monumental architectural work of art that has been recently inaugurated and has put into use for seven years. It is also a spiritual tourism address increasingly attracting pilgrims.

According to the legend, after defeating the An enemy, on the road coming back Soc mountain, Giong Saint stopped here and bathed in West lake. When on road, the Giong Saint forgot the iron rod broken in battle, whereupon, residents here built a temple to worship him.

The Non Nuoc pagoda is located in Soc temple complex with 110 meters high compared to mountain root. The pagoda is placed in the middle of mountain ranges of arc shape, like a person sitting on a throne, looking down towards the blue lake, and thriving villages of Ve Linh commune, Soc Son district, Hanoi. 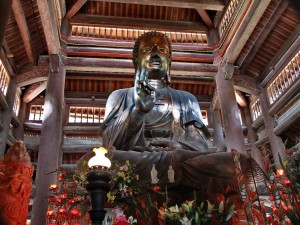 This temple was damaged. In 2000, Monk Thich Thanh Quyet decided to rebuild the pagoda and cased a bronze statue of Buddha Shakyamuni that was the largest one in the country at that time. The statue was casted by craftsman Vu Duy Thuan in Lam town, Y Yen district, Nam Dinh. The statue was made during 18 months; with weight 20 tons of bronze, the lotus platform of 10 tons in weight, 1.35 in high; the stone pedestal 1.71 in high. If taking the stone monument into account, the statue has the height of 8.4 meters.

It was rebuilt on the slope of the mountain, the south of Nha Bia Mountain. The main hall has area of ​​260 square meters, 14 meters in high. Master monk Thich Thanh Quyet said that 30 tons of bronze were purchased from Singapore, 600m3 ironwood from Laos, 30m3 of green stone from Thanh Hoa.

Over hundreds of years, ups and downs of history and nature, the pagoda’s foundation was accidentally discovered few years ago and the city People’s Committee decided to build on the former ground with the donation of Buddhist monks and nuns. The temple is located on the back of the mountain, solemn campus and romantic landscape.

In 2004, Buddhist Church of Vietnam solemnly a ground breaking ceremony to construct the Vietnam Buddhist Academy- a monk training center for the country.