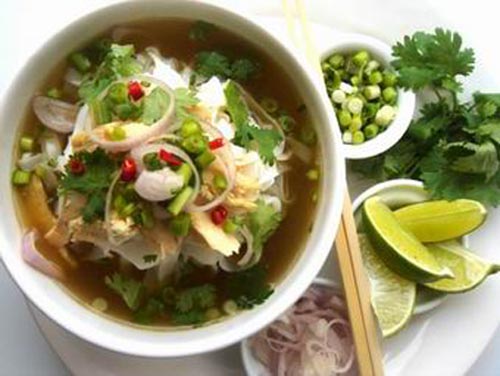 Born in the early 20th century, the Vietnamese pho has been gone together with Vietnam ups and downs. Pho is not just simply a delicious dish but it really is becoming a “culinary ambassador” contributing honor Vietnamese culture to international friends. Pho is praised in all art forms: poetry, art, movies, theater. The dish is full of homeland’s aroma.

Pho is a Vietnamese noodle soup consisting of broth, linguine-shaped rice noodles called “banh pho”, a few herbs, and meat. Pho is a popular street food in Vietnam and the specialty of a number of restaurant chains around the world. It is primarily served with either beef or chicken. 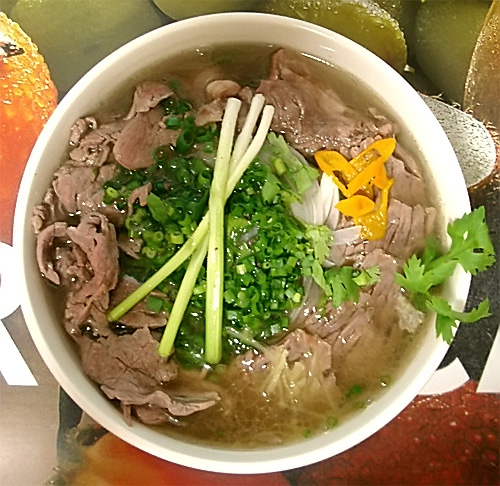 Beef Pho Bat Dan are much appreciated by diners as genuine Hanoi “Pho”. It is not only by the delicious taste but also by way of traditional processing. The noodle soup bowl is filled with beef meat and clear broth but not squeezed lemon and not served with bean buds or basil herbs as other shops. When customers asked for lemon, the shop owner explained that the Old Hanoi Pho did not season squeezed lemon but they only used vinegar that make the beef noodle soup delicious in right away.

The vinegar must be pure vinegar not including garlic because the garlic flavor will lose the taste of the noodle. That is the principle of the old Hanoi Pho and Pho Bat Dan has held that principle up to now. Bat Dan pho’s broth is somewhat more salty than other types of noodles. But that taste  charms diners when it is blended with the frugality of the stew bone, the sweetness of the rare soft meat and the sour of the vinegar.

According to chef Didier Corlou of Sofitel Metropole Hanoi, if you visit Viet Nam and don’t try phở, then you haven’t really experienced the country’s cuisine.

“Phở is one of reasons I’ve remained in Viet Nam for fourteen years”, says Corlou, referring to the popular soup found on almost every street. Mr. Corlou is so impressive with Pho that he and other French advocates persuaded Ambassador Fre’de’ric Barono of the European  Union to organize a workshop on the popular dish. “Pho”- Vietnamese Heritage attracted attention cultural researchers, poets, and Vietnamese culinary experts.