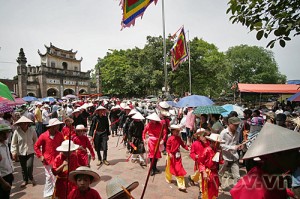 The Giong festival is a traditional festival that is annually held in many parts of Hanoi to commemorate and praise victories of mythical hero Saint Giong who is one of the four immortal heroes according to Vietnamese folk belief. There are two typical Giong festivals in Hanoi: one in Soc temple, Phu Linh commune, Soc Son district and another the Giong festival of Phu Dong in Phu Dong temple, Phu Dong commune, Gia Lam district. They are both recognized as the intangible cultural heritage by UNESCO. The outstanding value of the Giong festival is a cultural phenomenon that is preserved and promoted through next generations. Despite close to Hanoi center, under the influence of war and foreign cultures, the Giong festival still survives independently and stably without  commercialization. 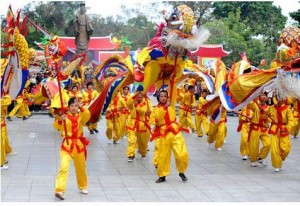 The Giong festival is a traditional festival imitating lively and scientifically the fighting’s content of Saint Giong and Van Lang residents against An enemies, thereby raising the public awareness about the forms of ancient tribe war and educating the patriotism, martial art traditions, indomitable will, and independence and freedom desire of the nation.

According to folk literature scientists, the Giong festival of Soc Son where Saint Giong flied to heaven and the Giong festival of Phu Dong where Saint Giong was born are more meaningful than others in terms of both messages of legend and art performances. The worshipped saint embodies the aspiration for a peaceful country, harmonious rain and wind, and abundant harvest.

The Giong festival of Soc Son is held on sixth of January and the Giong festival of Phu Dong is held on eighth or ninth of April (lunar calendar). There are many traditional rituals during the festival such as procession ceremony, incense offering ceremony, the ritual of bathing saint’s statue and bamboo flowers offering ceremony to the Thuong (Upper) Temple where is dedicated to the Saint Giong.